We are at the Vilangudi tank brimming with water and the Ayyanar temple on its bank has suddenly become a scene of action. There’s a small crowd gathered to look at Maran, Mayandi, Arul, Ramu and Anbu show their mettle in swimming. They stand tethered to trees, their eyes glinting; they seem vigilant and wary of the onlookers. “These are some of my star bulls that have won laurels in many jallikattu events,” says S Deepak, who owns 16 adult bulls and eight calves. As if in response, five-year-old Maran gives a nerve-rattling grunt and people back off in caution. 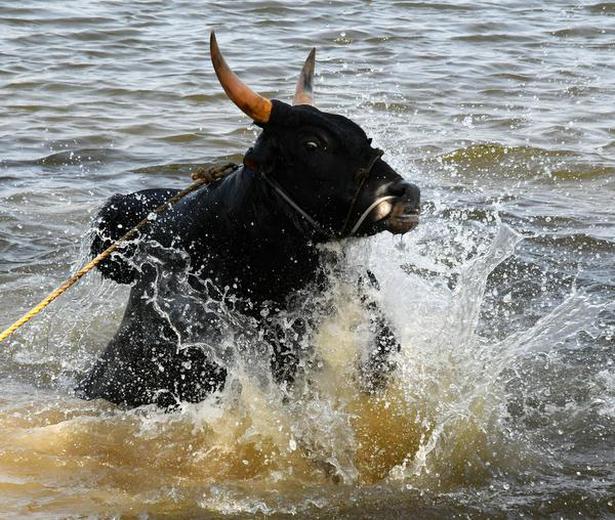 In the colour of the night sky, sporting a pair of razor-sharp horns, Maran stands an impressive five feet, his hump towering over him. Kicking his hooves back and forth, he keeps grunting, signalling to strangers to stay away. But Deepak refers to the fearsome bull as his baby. “He’s just a kid and yet to grow into a veteran. However, in the past two years he has participated in over 40 jallikattus and won in nearly 35 of them,” beams Deepak, also a bull tamer. “The bulls are like my brothers and I have named them all after ancestors or deities. At home, they are docile and sober but when it comes to the game, they have to be watched out for.”

Except Arul, a three-year-old bull that’s a cross breed between Kannapuram and Poorni breeds, all of Deepak’s bulls belong to the Pulikulam breed, known for its agile build and medium size making it a perfect choice for jallikattu. “Traditionally, it was the Pulikulam breed, native to the Madurai region, that was used for the sport. For instance, the large and hefty Kangayam breed is not suitable for jallikattu and hence only rekla races are done using Kangayam bulls,” says 43-year-old Deepak, who has been a bull tamer for two decades now. “Apart from the breed, the bulls are classified based on the skin colour and pattern and are locally referred to with names like karisal (grey), macham(mole-like marks on the skin), kaari (black), mayilai (stripes), sevalai or kuraal (with a pink or red tinge to the skin tone).” Unleashing Maran, Deepak leads him to the water and the bull happily gets in and puts up a good show of swimming, keeping his horns and head above the water surface, breathing out through his flared nostrils. Two other bulls follow suit and swim about with the help of their trainers. Mayandi the bull seems calm; but once he’s lead on to a patch of soil, he just charges forth on to the ground, fiercely poking his horns into the earth and throwing up mud. “This is referred to as mannu kuthal and often misconceived that the bull is being trained to be violent, but this is an exercise that helps strengthen the spine and neck bones,” says Deepak.

There are different formats of the game for which the bulls are trained specifically. Games like erudhukattu, vadam, velivirattu and manjuvirattu are some other forms of jallikattu conducted in Southern Tamil Nadu. While the popular vaadivasal jallikattu takes place in eight districts, the vadam sport is held year round in Madurai, Dindigul, Sivagangai, Ramnad and Tiruchi districts. Some of these events are organised for church festivals as well. “In vadam, the bull is kept tethered with a 40 metre rope and a team of nine men try to embrace the animal within a closed area,” says Deepak. “I have trained five of my bulls for vadam, two for velivirattu while nine are jallikattu players.”

“Depending on off-season and the peak-season for jallikattu, we train the bulls like athletes. Apart from hour-long swimming sessions, we do cross-fit training with slow and fast jogging. On alternate days, the bulls are made to stomp clay for strengthening of thigh muscles and to plough sand for shaping up the shoulders,” explains Deepak. The animals are also given a nutritious meal that’s composed of cotton seeds, wheat dust, ground pulses such as urad and thuvar dal. Only during off-season, the bulls are fed rice while during jallikattu period, their diet is protein-rich. “The player’s diet also includes honey, figs, and dates,a kilo each daily. We also offer them home-made traditional medicines made of ginger, garlic and onions to build immunity,” he adds.

Bulls aged over 15 years are considered jallikattu veterans and become sought-after as breed males. Ramu, the oldest of Deepak’s bulls is 17-years-old and is a star in the surrounding areas. Some, such as Nondi even attain celebrity status and become viral on online platforms like YouTube.

The original can be accessed at  :https://www.thehindu.com/society/with-pongal-round-the-corner-bulls-and-bull-tamers-flex-their-muscles-alike-getting-ready-for-the-game/article25969763.ece 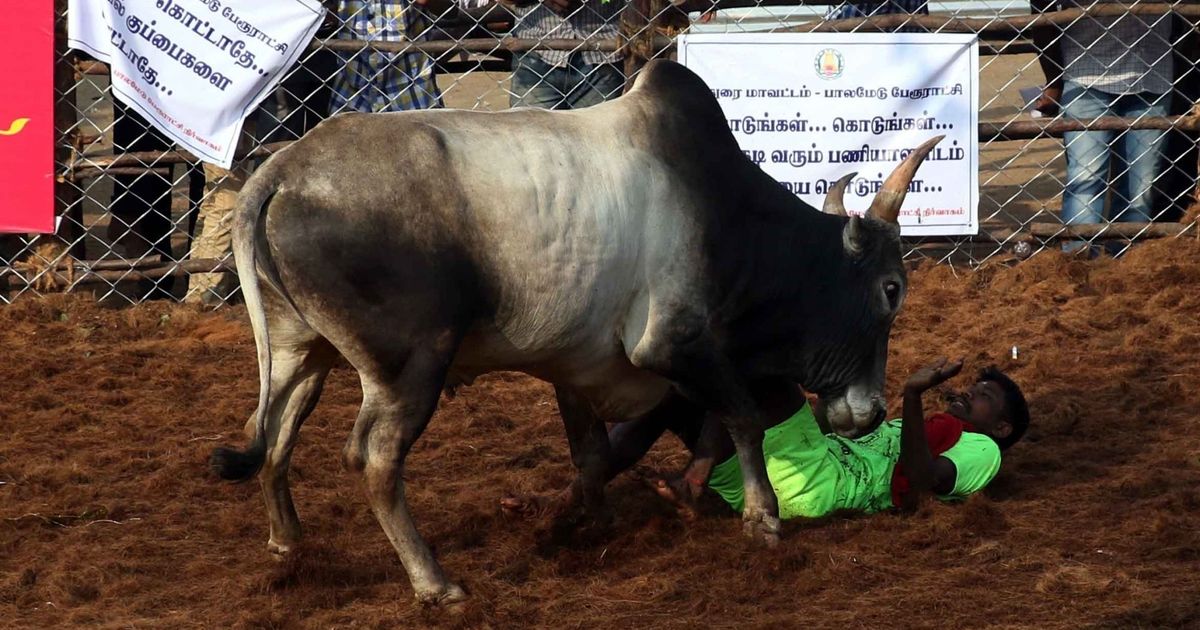 The Tamil Nadu government has issued a government order to conduct bull taming sport jallikattu in three places in Madurai in January.

“Under Section 2 of the Prevention of Cruelty to Animals Act 1960, the Tamil Nadu governor hereby notifies that jallikattu may be conducted on selected days in the places specified,” the order dated December 24 read, according to The Times of India.

The traditional sport involves a bull charging into an arena where participants attempt to encircle it and grab its hump. The participant who is able to cling on to the animal is declared the winner.

But for around a decade now, the sport has been embroiled in a legal tangle. After a campaign against jallikattu by animal rights groups such as People for the Ethical Treatment of Animals, the Supreme Court bannedthe sport in 2014. In January 2016, though, yielding to popular pressure, the Bharatiya Janata Party-led Union government published a notification allowing bulls to be used in the sport. Animal rights groups challenged this, prompting the Supreme Court to quash the notification a few days later.

One year on, in January 2017, lakhs of Tamil Nadu residents poured ontoChennai’s Marina beach, protesting the ban on jallikattu. Several students, members of the youth wings of political parties and IT employeesparticipated. Holding placards and demanding that the ban should be lifted, these protestors claimed that the jallikattu was necessary both to preserve a cultural tradition and because the bouts helped identify the most robust bulls necessary for breeding native species of cattle.

After more than a week of protests, the Tamil Nadu government passed an amendment to the Prevention of Cruelty to Animals Act, 1960, a central law. The amendment was approved by the President of India and jallikattu events were permitted again.

But the legal challenge to jallikattu has not been put to rest entirely. The People for the Ethical Treatment of Animals challenged the amendment, and the Supreme Court has said a constitutional bench will examinewhether jallikattu is a cultural right.

Support our journalism by subscribing to Scroll+ here. We welcome your comments at letters@scroll.in.

This article has been reproduced from Scroll.in dated Dec 27, 2018.

The original can be accessed  at : https://scroll.in/latest/907252/jallikattu-tamil-nadu-allows-bull-taming-sport-in-three-places-in-madurai-next-month 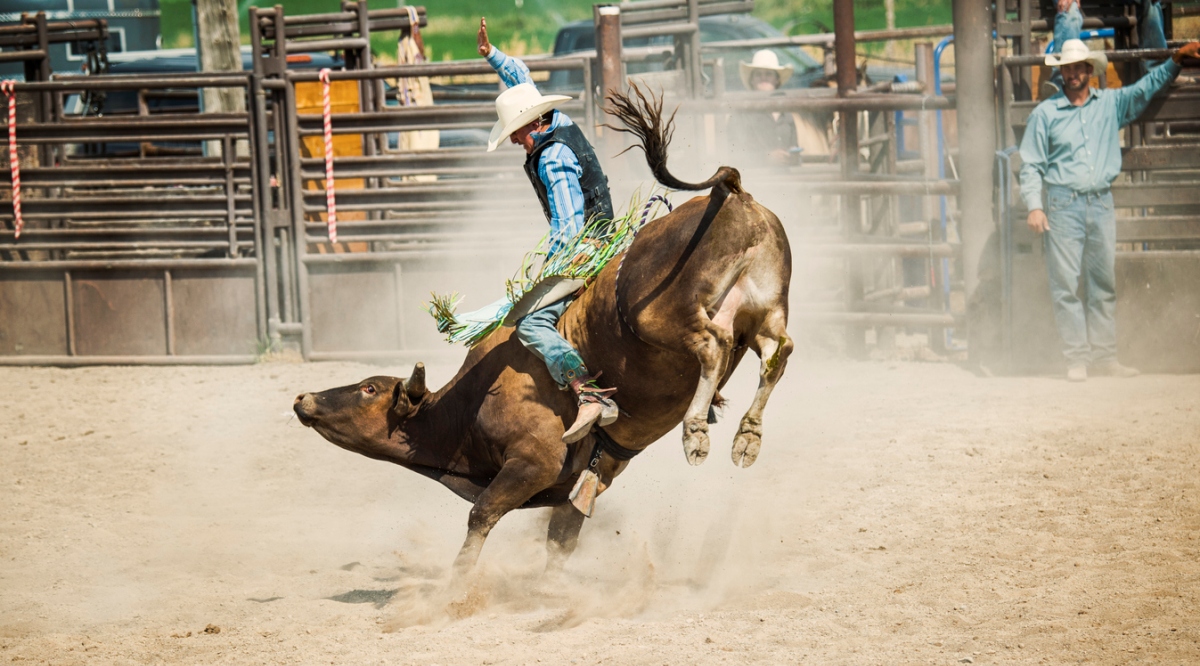 People for Ethical Treatment of Animals (PETA), which petitioned the Indian Supreme Court to stop Jallikattu, is not taking similar legal action against bullriding, a sport with similarities to the Tamil event.

Three days of bullriding organised by Professional Bullriders started on Friday at the Madison Square Garden here without a legal challenge or active protest from PETA in contrast to its actions in India against Jallikattu.

Unlike in Tamil Nadu, where Jallikattu is a traditional cultural event held around the Pongal annual harvest festival, bullriding is a commercial sports activity backed by major US companies and even the US government’s Border Patrol. Cheapest tickets for the Madison Square Garden event cost $59.

PETA President Ingrid Newkirk said in a statement to IANS, “Events like those held by the Professional Bull Riders (PBR) are rare in today’s civilised society and despised by the vast majority of people all over the world.”

“PETA US, which is a separate entity from PETA India, will protest this cruel spectacle and expects it to go the way of bullfights, which have been banned in more than 100 cities in Spain as a direct result of action by PETA and its affiliates,” she added.

PETA did not respond to a question from IANS why it was not taking legal action against bullriding as it has in India.

Despite Newkirk’s claim that events like PBR’s “are rare in today’s civilised society,” 81 bullriding events are being organised across the US this year by the PBR alone and some are also to be televised by CBS, a major national network.

The bloody sport of bullfighting, in which the animals are killed unlike in either jalliattu or bullriding, continues to be held in Spain where a constitutional court overturned Catalonia province’s ban in 2016.

A global bullriding championship is scheduled to be held next month in the US with teams from the US, Australia, Brazil, Canada and Mexico participating.

It also lists the US government’s Border Patrol as a partner.

Some of the PBR events make a show of patriotism with spectators waving American flags, which are also paraded in the arenas, and feature military bands.

The Madison Square Garden, which seats more than 18,000 spectators and bills itself as “The World’s Most Famous Arena,” hosts sporting events, concerts and political events. Prime Minister Narendra Modi’s rally for Indians was held there during his 2014 events.

India’s Supreme Court banned Jallikattu in 2014 in response to a case spearheaded by PETA alleging the event inflicted cruelty on bulls.

After protests in 2017 in Tamil Nadu against the ban on the centuries-old cultural event, the laws on preventing cruelty to animals were amended to allow limited Jallkattu events with strict regulations.

PETA and other organisations have filed another appeal to the Supreme Court for a total ban on Jallikattu and a constitutional bench is to consider whether Tamil Nadu can retain the event as a “cultural right.”

This article has been reproduced from The Statesman dated January 5, 2019. The original can be accessed at :  https://www.thestatesman.com/world/peta-not-taking-legal-action-us-bullriding-sport-similar-jallikattu-1502722193.html

After nearly six decades, the Great #Jallikattu Revolution saw hundreds of thousands of Women pour out on the streets of all parts of Tamilnadu – Cities, Towns and Villages alike.

I salute these brave women were the real reason behind the success of the Jallikattu struggle.

A Jallikattu Photo Exhibition was held at Kaumara Susheela International Residential School, Coimbatore on January 7, 2018. It was held as a part of the ‘Pongal Vizha’ celebrations at KSirs School. Photos taken by Mr. Balakumar Somu, Founder, ARHAM Trust, were displayed in the exhibition.